Standing together in Lembu Park Open Space (the ‘Minimart’), 32-year old Sandir points to a spot on the ground and reminisces. In 2008, on the first of three migration trips to Singapore, the Bangladeshi man was caught for littering here. He professes to remember it clearly: after chewing on some betel leaves, he spat them onto the ground, only to feel a tap on his shoulder and a voice saying “bhai, why you throw that leaf?” A plainclothes policeman then asked for his work permit, and issued him a $150 fine. Sandir was warned not to protest, or his fine would be increased. I asked Sandir how he felt about the fine at the time. “No angry,” he insisted, “because I new [to Singapore], I scared.” Instead, he felt sadness and guilt, since a silly mistake had cost him money that he could have sent home.

In 2012, TWC2 drew attention to the “cleansing operations” that are often conducted to police migrant workers’ behaviour in Little India. Today, little has changed. Sandir tells me that his story is just one of many. That very night, he returned to his dormitory to find a friend who had been fined $300 for a similar offense. When they heard each other’s stories, they laughed and cried: “heart pain, two people share”. The eight other Bangladeshi men I interviewed about this issue told me that it is common to be fined for littering in Little India, sometimes even when one is merely sitting by a can of Coke or a cigarette they had not touched.

It is admittedly difficult to piece together Sandir’s story. Six years have passed, and it is likely that several details have been omitted. Singapore’s laws do penalize littering in public places, so it is possible that Sandir did deserve to be accused of littering. However, the fine he received and the fact that his story is not isolated raises some important questions.

First of all, are heavy fines warranted? For migrants who mostly earn less than $20 a day responsible for the livelihoods of their families back home, a $150 fine is likely to cause far more anxiety than it would for the average Singaporean. The penalty is felt particularly keenly by Special Pass holders who are barred from working. A stern warning or a lower fine would suffice on the first offence. 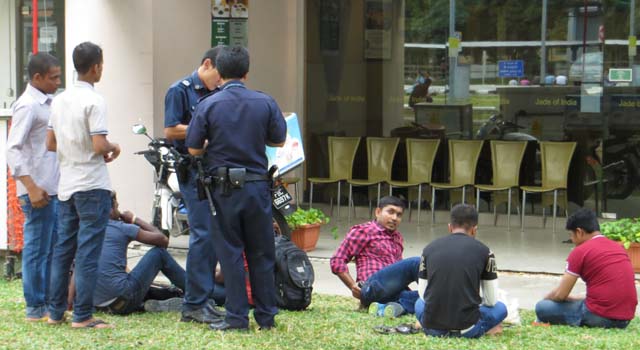 And secondly, why Little India? Walk around Little India and you will likely run into more police in public than you do elsewhere in Singapore; or, as Jamail puts it, “other place no have security, only this place.” In the Minimart, policemen patrol the area on a regular basis. This can be an annoyance for men who are simply looking to enjoy their day uninterrupted. A police-operated CCTV stands in the middle of the square. Although migrant men are seemingly free to gather in Little India on weekend nights, their right to move about and behave freely is curtailed by the presence of police patrols and CCTV cameras (or, as the men would say, “CC cameras”) that survey their every move. What’s more, migrants are excluded from the void decks in the area. On Sunday evenings, when the rest of Little India is teeming with life, these void decks remain conspicuously empty. Auxiliary police patrol them on a regular basis, telling migrants they cannot rest or gather there. Jamail presumes that this is because of the complaints of Singaporean residents: “Singapore always listen the complain. Right and wrong no see—complain first.”

‘In Singapore, I learn…’

These surveillance mechanisms operate on the assumption that migrant men are a threat to public order in Little India, but in fact migrants are more than ready to follow Singapore’s laws. Their gripe with Singapore has more to do with working conditions and errant employers than with the restrictions they face in public space. Littering laws are celebrated for keeping Singapore spick and span. In Sandir’s words, “I like, in Singapore, the environment. Everything very clean, law very strong… [but] some boss, some company, bad… In Singapore, I learn to be neat and clean. This is my discipline. Now everywhere I keep neat and clean.” When littering laws are not adhered to, it is not so much migrants’ unwillingness to comply as the fact that they are not used to having such laws around. These laws are so unusual to migrants that stories circulate about them back home. “I village man,” Kamrul tells me, “people tell me [that when I am in Singapore], bhai, anything no do. If you throw [litter], you die, [but] in Bangladesh, anything throw also can.” Another man’s uncle—who had once worked in Singapore—sat him down to caution him about the fines for littering before he left his village. All this to prepare men to adapt to a sociopolitical context in which the state is not absent, but ubiquitous; an environment where laws are strictly enforced, though perhaps for some more than others. 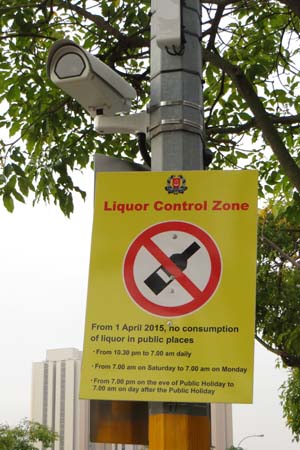 Liquor laws are also an interesting case in point. Immediately after the 2013 ‘Little India Riot’, the government ruled out public drinking in Little India on weekends, public holidays, and the eve of public holidays. This year, Little India was designated a “liquor control zone” within which breaking liquor laws could result in a significantly higher penalty. The Liquor Control Act operates on the presumption that migrant men are exceptionally guilty of excessive drinking. Yet, the law has gone down well, at least with the Bangladeshi men I spoke to, who unanimously voiced that they were in agreement with it.

Alcohol is, after all, haram for Muslim men. Most Bangladeshi men would never have touched alcohol at home—Bangladesh is more than 90% Muslim—and the minority who do drink in Singapore often do it to cope with the stress of migration. For these migrants, the alcohol laws prevent them from spending unnecessary money: “if drink, cannot give money to family,” Tarif tells me. Migrants who refused to drink were quick to dissociate themselves from other migrants who did ‘bad’ things, telling me that while they knew Bangladeshi men who would ‘drink until mabo’, most men (including themselves) would never think of doing the same.

After an hour spent with 33-year old Shahid walking around Little India, there is something I feel I must ask: “do you think Singapore has changed you?”

Shahid laughs. He has never heard a Singaporean ask him this before. Too often we see migrants as a transient population who come and go, who leave Singapore unaltered by the experience. “Last time, before I coming, I always fighting,” he tells me. [But] here I learn to be peaceful. This I teach my son.” He tells me that the strict laws against littering in Singapore and the constant police patrols he encounters in Little India teach him discipline, and have helped to make the area safe for Singaporeans and migrant men alike.

Shahid’s story—like many others—is testament to how migrant men often harbour a deep respect for Singapore’s laws and regulations. While the government polices their leisure time in Little India through the use of various mechanisms—from liquor laws to police patrols—migrants insist on viewing these laws not as constraints, but as an opportunity for personal growth. And why should this come as a surprise? There is no reason to expect that migrant men are any more disruptive or threatening than the average Singaporean; forced to migrate by economic circumstances, they make the most of a difficult experience. Even a short walk around Little India will show just how few men ‘misbehave’ in the area. Hardly anyone is drinking or smoking; most are hanging out with friends or using their phones.

While the men I spoke to appear unbothered by the current restrictions placed on Little India, these reflections should give us pause. They challenge us to ask why such constraints are in place, what kind of stereotypes they project of migrant workers, and the implications of these stereotypes. They prompt us also to how future developments in Little India might ensure that the area is safe for the use of migrant men, without imposing on their freedom.