In one of the richest cities of the world, the wages of toil

$6,500 is the amount Hossain Jahir paid upfront to secure a job in Singapore. It took him two and a half years to earn this amount back. Only then did his family begin to benefit from his working here.

With the median wage in Singapore this year at $3,770, it is very difficult for almost anyone to have a real sense of a shipyard worker’s low earnings and the practical sacrifice it is to go two and a half years without any real income. An average Singaporean family, going by the median income, would be able to repay $6,500 in 2-3 months if they minimised other expenses.

Hossain wakes up at 5.30am every Monday to Saturday and is taken by lorry from his dormitory to the shipyard with about 26 other workers. The workday starts at 8am, but he continues working after 5p.m. with extra hours counting as overtime. He usually works from 8am to 8pm, a gruelling twelve hours of physical labour.

At $17 a day, the overtime rate should be $3.19 per hour, but Hossain tells me that his overtime pay is only $2.50 per hour. Something is wrong somewhere.

I ask him if he works on Sundays. Yes, two times a month. He is paid $34 a day on Sundays.

Was this the life Hossain signed up for? Did he know what it would be like? I ask him.

He thought a “marine sector” job would mean working on a ship, and that he would be able to travel and see something of the world. When he arrived in Singapore he found out that he was to work at a shipyard. There was nothing for it but to work and get on with life.

I ask him next if there is anything he likes about his job.

The reply? A wry smile and shake of the head, as if I am worlds away from the reality he lives in where work is hard and unpleasant but something that must be endured. “Just work only,” is all he manages to say. 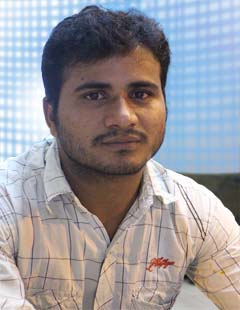 Eslavath Laxminaik has been in Singapore for almost six years. He hails from Andhra Pradesh, India. His day begins much like Hossain’s. He wakes up at 5am and works from 7am- 4.30pm, continuing for three more hours overtime each day, earning $2.70 per hour in basic pay. He started out earning $16 a day like Hossain but now earns $23 daily. He enjoyed a “big” jump in salary ($3) after his employer sent him for a course to learn how to fit pipes. He began doing pipe fitting in addition to cutting pipes and grinding.

Once more I ask whether there is anything he likes about his job. He smiles. It is just “hard work”. There isn’t anything more to it.

I sense a slightly bitter resignation, hidden beneath the incredulity of being asked whether he likes anything about work at all, as if the very concept of enjoying work were alien to him.

The pay is low, pushing both workers to spend as much time as they can toiling away, to earn that little bit more. All this time, Eslavath has not chosen to take leave; he hasn’t seen his family in years. Like many foreign workers, he has chosen to devote his prime years to working as much as he can. Does he have an end he is working for? No, not really, he tells me, no plans except going back to India. Eventually.

Talking to these two workers makes me certain that living life day to day, without the real possibility of realising bigger hopes and dreams is not a good thing at all. I am sure they have aspirations, but they either cannot articulate them, or they think it foolish to do so given the harsh reality of their present lives.

Or maybe it is responsibility to family that keeps them pushing through the hard physical labour they face every day.