Worker offers to pay for own medication, yet employer refuses assistance

I am speaking to Selim Mahmud Babu regarding his most recent injury — several broken bones in the fourth fingers of his left hand. West Point Hospital gave him four days of medical leave. He says he asked for more but was refused despite complaining of persistent pain. He feels that the doctor was abiding by his employer’s wishes.

When reasoning with his employer became futile, Selim visited Alexandra Hospital on his own. This time round, he was given a total of 87 days medical leave, a huge difference from what West Point felt he should have. However, since Selim visited Alexandra without his boss’ blessing, he had to pay the $97 charge out of his own pocket, a huge sum of money for a low-wage shipyard worker like him. Foreign workers do not enjoy any subsidy.

Selim has worked for his employer for the past six years. “You must like working for this company?” I suggested. “The boss treats you well?”

Selim’s expression betrays the sense of disappointment he felt when his boss’s attitude towards him changed completely after his incident. 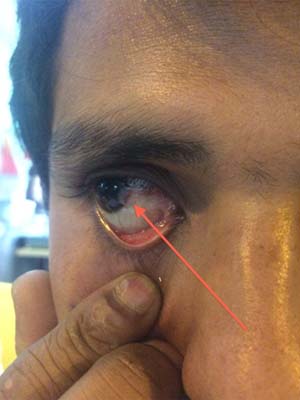 To make matters worse, Selim’s disappointment is further saddled with frustration. After some probing, Selim reveals that this was not the first time his employer had been lax with his accountability.  Approximately a year ago, while at work, a spark flew into Selim’s eye, causing excruciating pain.

“Don’t have safety report, no bring hospital”, remarks Selim. He had sought his boss’s help on numerous occasions but has been brushed off each time. “Boss say ‘I busy, I busy’.”

The milky spot between his iris and sclera grew larger after the incident and the pain never did go away. Selim decided to bring up this old, unresolved injury during his independent consult with Alexandra Hospital. He was prescribed a three-month supply of eye drops, which his employer at first agreed to pay for.

However, as Selim had gone for months without proper attention and treatment, three months of eyedrops was not enough to cure or eradicate the pain. As a result, Selim requested of his boss the documents needed for him to purchase a new supply of prescription eyedrops from Alexandra Hospital. “I say I buy myself. Money no pay, no problem. I say this is my own.” It seems a decent arrangement and Selim made a reasonable compromise on the issue. However, much to his shock, he was refused  the necessary documents, thwarting a new supply of medication.

Selim is unable to explain why the employer refused his request, but it may be related to a ‘suggestion’ that the boss made. According to Selim, it was mooted that he should ‘take leave’and go home to Bangladesh to complete his recovery. But Selim perceived a more sinister motive.

Similar stories shared by friends have convinced Selim that once he’s taken home leave, he is at risk of his employer terminating his work permit. He’ll have no job to come back to. Furthermore, being outside Singapore, he cannot appeal to the law to enforce an employer’s obligation to provide medical care and, should there be any resulting permanent disability, compensation. There seems little choice for Selim but to continue staying in Singapore, away from family and living in constant day-to-day ambiguity.

Selim has now rented a bunk in the Tekka area, at a monthly rent of $250. He has lodged an injury compensation claim and is awaiting assessment. He has been staying outside his work quarters since November 2014. When I ask Selim how long more he will be able to keep up his rental and living expenses, he does not seem to understand my question. Perhaps the financial angle is too distressing to think about, on top of all the other uncertainties — medical, family responsibilities — he has to bear.