It is not often that we get to meet a migrant worker that has been working and living in Singapore for more than 20 years. Subramaniyan Peramaiyan first came to Singapore from India in 1995 as a construction worker, He paid $5,500 in agent fees to get his first job, a very handsome sum of money. But that was only the beginning. For every subsequent job, he has had to pay too, and the rates have been rising.

“Last time I started with very low pay, now people can earn $13 a day, $20 if you are experienced. But they have to pay so much to the agent now! I went back three times and came back just two years ago,” he explains, adding that for his current job, “now I paid $14,000!”

But Peramaiyan, being an experienced worker in construction, is already one of the few fortunate people who has paid agent fees that are on the cheaper end. Younger, newer workers, like Sujel, who is in Singapore for his first job, has had to fork out fees that are up to four times more than what Peramaiyan first paid in 1995. 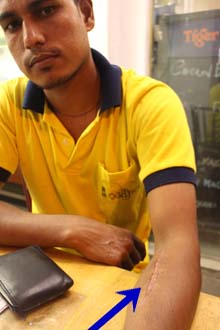 Sujel was injured in his left forearm after he fell

“I only come Singapore ten months, then now my arm broken,” Sujel told us. “In Bangladesh I gave the agent around $18,000, till now I haven’t even finish paying.”

Even before the accident that broke his arm, the burden of completing his payment weighed heavily on his mind. His basic monthly salary of $700 a month was too low.

“New people cannot come Singapore. Very hard job, very high agent fee. I will want to go back [to Bangladesh].” Sujel commented. “It is better to find work back home.”

Sujel’s agent probably charged a higher agent fee because the job he recommended gave a higher pay compared to what other new workers would typically get. But is it really worth it to pay so much when the harsh reality that awaits them is that of laborious, back-breaking work every day?

Singapore is painted as an idyllic place where anything and everything could be viewed as better than what India or Bangladesh has to offer in terms of salary. However, this problem of rising agent fees is often being overlooked. Current measures such as the Singapore Employment Agencies Act state that agents are not allowed to charge more than the equivalent of a month’s salary for each year of contract, capped at two months’ equivalent. However, the major loophole is that this only applies to Singapore-registered companies and agents. Job brokers in Bangladesh don’t come under our legislation and can charge whatever amount they like, pushing such fees up to exorbitant amounts.

On the other hand, South Korea utilizes a more practical and tech-savvy approach. Workers go online and register their own particulars and it is the Korean government’s Job Center that match potential workers to employers.  A standard form of employment contract is also required. There is no intermediate party, and the workers have better control over their lives.

This only demonstrates how easy it is to make things better in Singapore. There are proven methods that are superior to what we have. We desperately need to make major improvements in how we bring workers into our country if we want others to continue seeing Singapore in a positive light.