Swindle, cheat and manipulate, example no. 4

A guy from Andhra Pradesh state in India messaged us via WhatsApp asking for a consultation. Through Google Translate we managed to get a sense of what he was saying and that he wanted to speak to someone in the Telugu language. We found a volunteer and the following day, they spoke.

Said Ethan, our General Manager: “The client told her he was given a job offer, and wanted to check if it was genuine. He then sent me the offer letter.”

There were so many warning signs, it became entertaining. Below is the first page of the five-page letter offering employment.

The orange discs have been added by us, and the notes below refer to the number on a disc.

1. The name of the company on the letterhead is fake. We did a check with the Accounting and Corporate Regulatory Authority (ACRA) and found no such company.

3.The job offered, namely “cook”, is in a different typeface from the rest of the letter, and anyway it seems strange that an engineering company would be hiring a cook, though not impossible.

4. The telephone and fax numbers at the bottom of every page have international dialling code +64, which is for New Zealand. 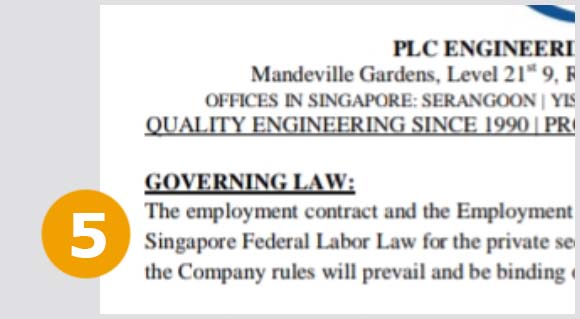 In one of the inside pages of the letter is a mention that:

5. The contract is to be governed by “Singapore Federal Labor Law” — there is no such law.

The footer of every page had a web address “www.plcengineering-sg.com”. This is invalid, giving a 404 error. But somehow, Ethan managed to find a website at “plcengineers-sg.com” which had a fancy-looking page, creating the impression of a large oil and gas engineering company.

This is the opening image of that site:

At the top left corner of the page, the name of the company is different. It is “PLC Engineers & Construction Inc”, whereas on the job offer letter, it is “PLC Engineering & Management Inc”. That’s marked as orange disc number 8 in the image below. In any case, companies in Singapore do not use “Inc” in their names.

In the “About” section,

9. The company name is different again. Here is is “PLC Construction Company”.

10. It describes itself to be “among the less than 1% of North Singapore construction companies who have….” Who uses descriptors such as “North Singapore”?

11. Here, the address is a factory building in Ang Mo Kio.

12. The phone number now has a Singapore dialling code. We could have tested by dialling the numbers, but by this point, there was really no need to.

The funniest bit is from the website’s list of clients.

13. One of them is the Louisville Cardinals, which is an athletic team from the University of Louisville in the United States.

However, it could not have been funny to the poor guy from Andhra Pradesh when we told him it was almost surely all fake, and a scam. Of course, he had had his suspicions, which was why he reached out to us in the first place. We could only hope he had not paid money for the job.