Systemic factors that encourage overstaying need to be addressed

By TWC2 volunteer Linus Chen, based on an interview in December 2020

Ziaur (not his real name) came to Singapore in February 2019 after paying an agent in Bangladesh 3 lakh taka (about $4,700 in Singapore dollars) to secure a job as a construction worker with a large multinational engineering firm in Singapore, earning about $600 a month. Unfortunately, after hurting his thumb and index finger on 21 August 2019 in what Ziaur claims was an accident with a rebar cutting machine, Ziaur had to stop work and seek medical treatment.

The following month, Ziaur filed an injury compensation claim at the Ministry of Manpower (MOM).

In January 2020, the employer cancelled Ziaur’s Work Permit. However, as Ziaur had filed a claim and it was not yet resolved, MOM put him on a Special Pass following the cancellation. This allowed him to stay on in Singapore until conclusion of the case. However, a condition of the Special Pass is that the person is not allowed to work. That left Ziaur with no income.

In June 2020, after investigating the circumstances of the reported accident, MOM ruled that the injury “was not caused by accident arising out of and in the course of employment”. No compensation was therefore payable. Ziaur filed an objection to this finding, but by August 2020, the objection had been dismissed. The employer then bought him a plane ticket for him to return home.

However, Ziaur didn’t take the flight; he chose to remain in Singapore.

He was caught 25 days later by the Immigration and Checkpoints Authority (ICA) for overstaying. He spent two days in remand at the ICA and on conviction, spent three days in jail in Changi Prison.

I meet him in December, so that means he’s been out and about for three months since release from jail.

“Why are you still here?” my editor asks Ziaur.

Our guess is that the police are investigating the landlord of the house where he stayed for the offence of harbouring an overstayer, and Ziaur is kept here as a potential prosecution witness.

What are the factors that push workers like Ziaur to commit the offence of overstaying? We must be aware of the socioeconomic dynamics that discourage migrant workers from returning home after they have lost their jobs in Singapore. The majority of migrant workers pay (often exorbitant) “finders fees” to agents in their home countries or in Singapore in order to secure work here. Before they even begin work, many migrant workers borrow money to cover these agent fees and find themselves deeply in debt to banks or illegal moneylenders or even relatives back home.

The hope is that they can earn enough to pay back these loans within a year or two.

In Ziaur’s case, the total money he earned from his job was not able to cover the fee he paid to his agent. The job only lasted half a year before he injured himself.

Workers who are unable to repay their debts may therefore be reluctant to return home, fearing harassment from their creditors as well as the loss of social status from having returned from Singapore as a failure. This is especially pertinent in the case of workers who have lost their jobs prematurely due to unforeseen circumstances such as injury.

What can be done?

TWC2 outlines two main recommendations to address workers’ temptation to overstay. First of all, more effort is needed to stamp out the practice of overcharging for recruitment (at the bottom of the page is a link to an article on this topic). If workers didn’t have to go into debt, they wouldn’t be in such a financial dilemma should they lose their jobs prematurely.

For injured workers, our present policy of requiring them to be sent home at the conclusion of the process is another root cause, though this only applies if the employer has cancelled the worker’s Work Permit.

If an employer did not cancel the Work Permit, the employee should return to his job as soon as his medical leave is over — which is totally reasonable. 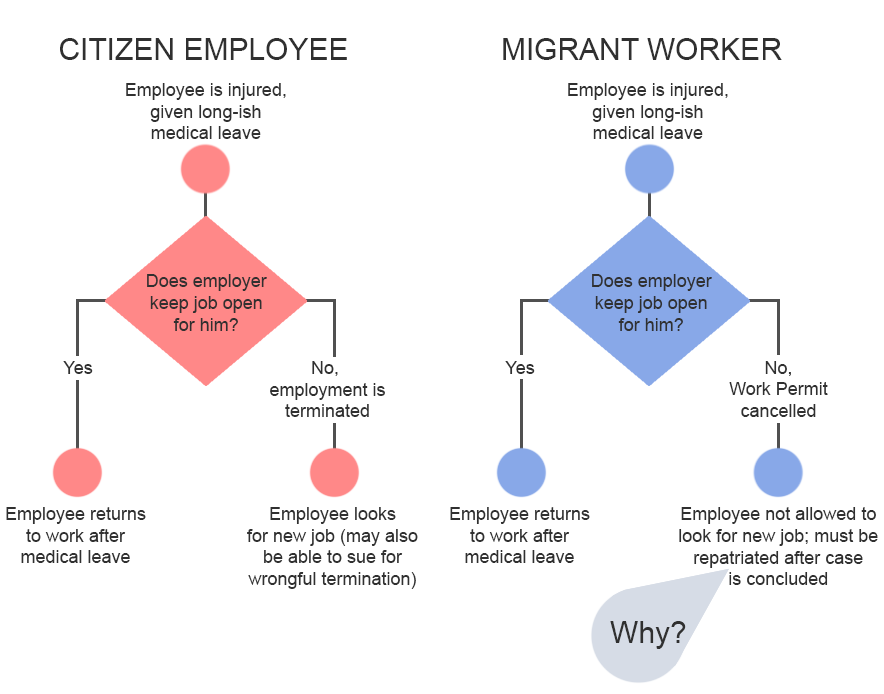 The problem arises when employers of foreign workers would rather cancel Work Permits than wait for their employees to recover. Without a job to return to, MOM requires such workers to be repatriated when the case is concluded.

TWC2 believes that a better policy would be to allow these workers to look for new jobs as soon as their doctors certify them medically fit.

While overstaying is a serious immigration offence, overly strict regulation demanding workers’ immediate return home creates additional costs to the state, such as the costs involved in conducting raids, prosecuting workers, jailing them and prosecuting landlords.

We must continue to be aware of the wider systemic issues that disadvantage workers, especially with regard to the exploitative economics of labour migration. “Returning home” is not as simple and frictionless for workers as we may assume it to be. Once they find themselves in debt, earning an honest living in Singapore may be their only hope for a secure future for themselves and their families.

In order to address the temptation of overstaying, we need to give them hope in the form of opportunities to continue supporting themselves financially, rather than treating migrant workers as disposable objects to be discarded as soon as they are hurt.