The ballroom at the Fort Canning Lodge was filled with excitement as 150 domestic workers filed in to take their seats around the fifteen big round dining tables. The workers wasted no time and started to pose for photographs with the decorations and backdrop for the event as pop music blared in the background.

This was the scene at the start of International Domestic Workers’ Day (IDWD) 2015 organised by TWC2 with two domestic workers group, the Filipino Family Network (FFN) and the Indonesian Family Network (IFN). This is the second year in a row that TWC2 is celebrating IDWD to commemorate the day ILO’s Domestic Workers Convention (C189) was adopted in 2011. The convention set international standards on the employment and social rights for domestic workers. The anniversary of the adoption of C189 falls on 16 June but the event was held on Sunday, 14 June. Why does TWC2 choose to mark this day and celebrate IDWD?

TWC2 president Noorashikin Abdul Rahman highlighted in her speech, “We choose to celebrate this day because we would like to make a statement that domestic workers are equal to other workers and should be given the same rights and protection as other workers.” Domestic workers in Singapore are not covered by the Employment Act. Consequently, their work hours are not regulated and they don’t have access to basic employment rights such as overtime pay, medical leave and paid holidays. 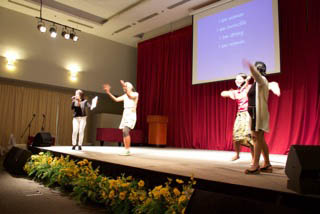 The three-hour event was a combination of sharing experiences, learning about rights and having fun. The FFN staged a skit on a domestic worker who hid her high blood pressure condition from her employer out of fear of losing her job. She eventually suffered a stroke and had to be sent home to the Philippines. The skit raised awareness of existing healthcare and social security protection available to workers in Singapore and their home countries and their inadequacies.

The IFN staged a skit on the experience of a worker who was denied adequate food and rest, a common problem faced by many domestic workers especially new ones. The audience were quizzed on their knowledge of Singapore laws pertaining to access to food and rest for domestic workers and the minimum standards set by C189 for these provisions. 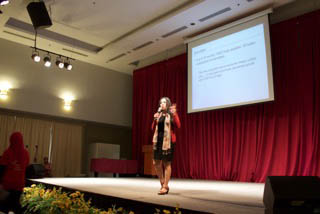 Shelley sharing tips on what t do when abuse happens

TWC2 executive committee member and senior volunteer case worker, Shelley Thio, shared tips on what domestic workers can do when their rights are violated. She emphasised the importance of gathering evidence, and advised workers to scrutinise and understand the contents of their employment contract and to insist on a copy so that when a problem arises their case can be lodged at MOM successfully.

The workers also learnt a few tips on how to keep healthy from a personal trainer, Mr Steffan Fung. A fellow worker, Ms Angie Jurez, shared how she incorporates exercise into her house work routine daily. 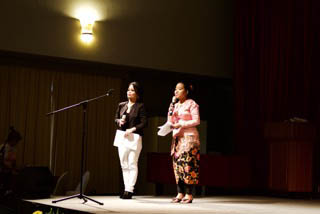 Overall, the workers were happy with the event. “The event awakened and encouraged us to stand for our rights especially the rights concerning our health. The basic right to have enough food and rest,” said Joan Paye, 37, who has been in Singapore for eight years.

A fellow Indonesian worker, Nurfadilah bte Suliki, 45, and who has been in Singapore for 18 years said, “I learnt that there’s still much to be done about our rights, for example, we need to campaign to the Indonesian government to have a system for overseas workers to be included in the country’s health and social security system.” 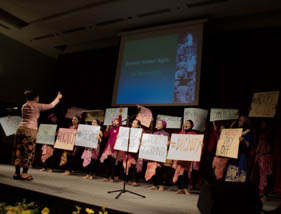 To date, only the Philippines has ratified C189. Indonesia and Singapore have yet to ratify the convention.